Dr. Jason R. Lambert is an Associate Professor of Management in the College of Business at Texas Woman’s University (TWU) where he also serves as Chair of the Chancellor’s Diversity and Inclusion Council for the TWU system that includes three campuses in Dallas, Denton, And Houston. He also is a founding managing member of IMAGIN Consulting, LLC, a boutique consulting firm that provides employee professional development, inclusive leadership training, and change management consultation to organizations needing assistance facilitating diversity, equity, and inclusion programming. Dr. Lambert’s research investigates how business practices and policies impact organizational culture and the experiences of workers from different identity groups. Before serving in higher education, his professional career spanned 10 years in leadership roles in the private, public, and nonprofit sectors. Dr. Lambert has received recognition for his teaching and research including the Most Promising Educator Award from the PhD Project, the Mary Mason Lyon Award for Distinguished Junior Faculty from TWU, and the Best Theory to Practice Paper Award from the Academy of Management Healthcare Division. He has presented his research at both regional and international conferences such as South by Southwest (SXSW), Academy of Management, and Southern Management Association. He has written op-eds for the Chicago Tribune and New Orleans City Business, and he has published in outlets such as the Journal of Business Diversity, Personnel Review, and The International Journal of Human Resource Management. Dr. Lambert also serves on the Denton Chamber of Commerce Executive Board where he volunteers as Chair of the Chamber’s DEI Committee. Prior to joining the TWU faculty, Dr. Lambert served as the first African-American Chair of the Management and Marketing Department at Saint Xavier University. Dr. Jason R. Lambert received his Ph.D. in Business Administration from the University of Texas at Arlington with an emphasis in Management and Human Resources. Dr. Ekundayo Akinlade is an Associate Professor of Management and Human Resources in the College of Business, Economics and Accounting at the University of Wisconsin, Parkside (UWP). She is a founding managing member of IMAGIN Consulting, LLC. Dr. Akinlade’s research covers topics including diversity, human resource practices, leadership and creativity. She has presented her work in both regional and international conferences, such as the Academy of Management, Midwest Academy of Management and the Management and Organizational Behavior Teaching Conference. She is a member of the board of reviewers for the South Asian Journal of Human Resource Management and she received the “Excellence in Peer Review” award in 2017 and 2018. Dr. Akinlade was a “Wisconsin Teaching Fellow” at the University of Wisconsin System. She received the “Outstanding Faculty Award” from Saint Xavier University African American Society. Dr. Akinlade is also a Senior Certified Professional of the Society of Human Resource Management (SHRM) and has a SHRM talent acquisition specialty credential. She serves on the board of the Racine and Kenosha Area SHRM chapter as the director of college relations. Before joining academia, Dr. Akinlade worked for several years in various managerial roles, including as a management consultant with Accenture, in different countries such as Nigeria, Britain, Switzerland, and the United States.

She has written for the Chicago Tribune’s Daily Southtown and has published her academic research in different management journals including Equality, Diversity, and Inclusion, Personnel Review, Journal of General Management, and Employee Responsibilities and Rights Journal, all listed on the Australian Business Deans Council Quality Journal List. Dr. Akinlade received her Ph.D. in Organizational Behavior and Human Resource Management from the University of Illinois at Chicago.

Aaron Ireland was born and raised on the south side of Chicago in a family that placed great value on education. His love for reading led him to discover lesser-known historical contributions made to society by his culture, which further deepened his love for learning. This led him to receive his undergraduate degree in Africana Studies from Tennessee State University (Nashville) where he focused on pedagogical approaches and other trends and policies that affect people who suffer from marginalization, as well as the many movements to end marginalization. He earned his Masters in the Art of Teaching from The University of Chicago studying critical theory and other progressive approaches to instruction/guidance and curriculum design.

Aaron has 7 years of experience in education, teaching grades from 4-12 in subjects ranging from Science to History. He is also the founder of an academic and enrichment non-profit that offers exciting workshops and tutoring to young people and their families in Chicago. He is excited to work with Imagin Consulting to promote greater awareness about diversity, equity, and inclusion to employees and company leaders. 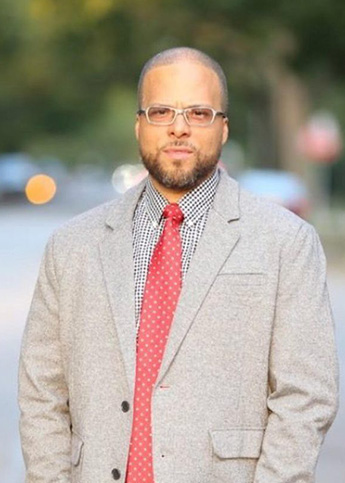 Oscar Holmes IV is the founder and CEO of WHConsulting Firm, LLC and creator and host of Diversity Matters podcast which premiered in 2020. Additionally, he is the Associate Dean of Undergraduate Programs, an Associate Professor of Management and the Rutgers University Student Executive (RUSE) Director at Rutgers School of Business-Camden where he teaches executive education, graduate, and undergraduate courses in Leadership and Managing Human Capital, Organizational Behavior, Conflict Management and Negotiation, and Crisis Management. His research examines how leaders can maximize productivity and well-being through fostering more inclusive environments and has been published in several top-tier management journals and books. He earned a Ph.D. and M.A. in Management from The University of Alabama, M.L.A. from The University of Richmond and a B.S. with honors from Virginia Commonwealth University. He is also a 2006 alum of Stanford University's Graduate School of Business Summer Institute in General Management. While on sabbatical in fall 2016, he was a Visiting Research Professor of Management at the LeBow College of Business at Drexel University and a Research Fellow at the University of Pretoria (South Africa). He is a resident expert for Psychology Today (PT) and hosts his own PT column entitled, “Beyond the Cubicle: Managing Human Capital.”

He has won numerous awards for his leadership, scholarship, and teaching such as being named one of Philadelphia Business Journal's 40 Under 40 and Diversity Leaders in Business honorees, one of Diversity MBA Top 100 Under 50 Emerging and Executive Leaders, Philadelphia Tribune Top 10 Under 40 Most Influential African Americans to Watch, and won a Rutgers University Leaders in Faculty Diversity Award in 2020, one of Poets & Quants 40 Under 40 Best Business School Professors in the world, and won the Mid-Atlantic Association of College of Business Administration Innovation in Teaching Award and the New Jersey Policy Research Organization Foundation Bright Idea Research Award in 2018 and 2020. Also in 2018, he created and hosts, Beyond The Mill, a live Diversity Dialogues Talk Show at Rutgers-Camden. In addition to his scholarship being covered in various news outlets, he is a highly sought-after speaker, organizational consultant, and has made a number of media appearances that include Huffington Post Live, TEDx, television, and radio interviews.